Knowing what Olyvia’s oxygen levels are can literally save her life! Because, she does not act as though she is sick. – Kimber Brittany Amborn (Mother)

Six year old PHighter Olyvia Jade was born on February 20, 2014. She was born at the University of Colorado Hospital at 28 weeks gestation, only weighing one pound and seven ounces! After fighting vigorously in the NICU for 117 days, she was released from the hospital.

Olyvia was born with Down Syndrome and is among the 50% of babies born with Down Syndrome who also have congenital heart defects. She was diagnosed with atrioventricular septal defect (AVSD) or a hole in the wall which separates the four chambers of the heart.  Olyvia underwent her first reparative  open-heart surgery in October 2014.  The surgery went well. She rocked it!

However, Olyvia was then diagnosed with Pulmonary Vein Stenosis (PVS), with narrowing of all 4 of her main pulmonary veins. The diagnosis was devastating. PVS, having no cure, is pretty much a death sentence. Healthcare providers at Children's Hospital Colorado urged us to make her comfortable, stating that there was nothing more they could do for her. 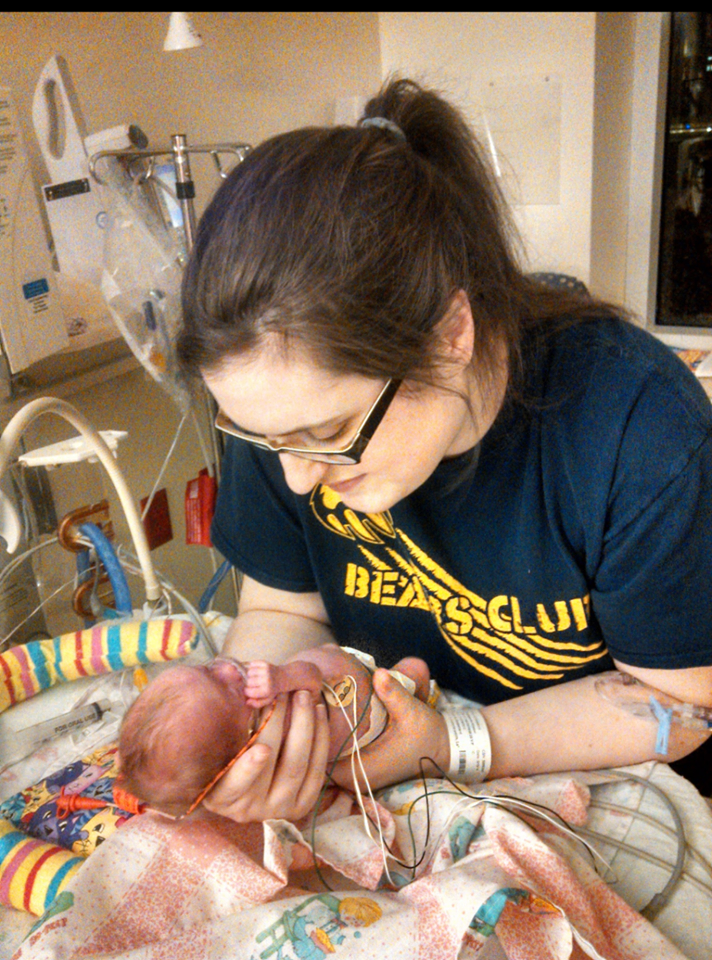 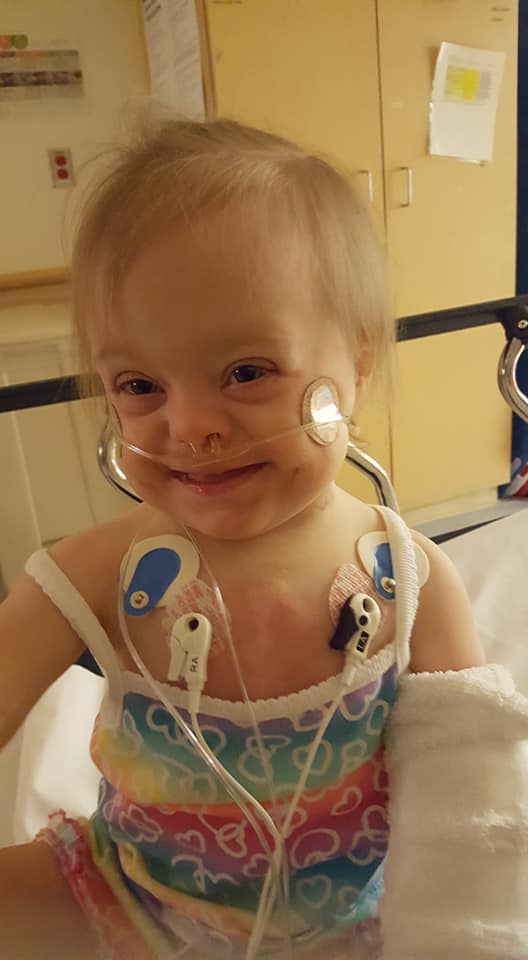 Of course, I wasn’t going to give up on Olyvia that easily. After lots of research, I found a specialist at Boston Children’s Hospital that could hopefully help Olyvia.  We flew out to Boston in July 2015. The doctors told us that Olyvia could have died on the plane due to her high lung pressures, which reached the 100s. We had no idea her pulmonary hypertension was so bad!

In Boston, Olyvia underwent her second open-heart surgery (way more intense and critical than her first). It was a very long and emotional 8-hour surgery! She went back to the ICU with her chest wide open just in case they had to get in there quickly. How many parents can say they saw their child’s heart beating? We stayed at the hospital for a long 21 days. Before leaving the hospital, Olyvia was given a medication called Gleevec, a chemotherapeutic agent, which was intended to stop the progression of PVS. She was on that nasty medicine for a year! But you know what… her veins are now WIDE open! She is truly a miracle!  (Well, three of her veins are open.  During her second open-heart surgery,  her doctors actually had to sew her top right vein to one of the other veins because it was fully closed.)

We had just started to think that all of Olyvia’s medical problems were starting to get resolved. Back in April 2016,  when Olyvia underwent sedated echocardiography, which she receives every 6 weeks to image her veins, her heart rate jumped to 305 beats per minute! Doctors immediately woke her up, and told us to go to the ICU immediately. They said they were going to cardiovert her (use the paddles and try and shock her heart back to normal sinus rhythm). When doctors started to shock Olyvia’s heart, her heart was extremely fatigued and stopped beating! She was gone for over 2 minutes, but they were able to bring her back with chest compressions. She was then diagnosed with atrial flutter. From March 21st to October 7th, 2016, she flew  to Children’s FOUR times to receive treatment  for her flutter and multiple infections! When her heart rate went back up to 300 beats per minute, the doctors decided to insert a loop recorder (a small device that records when her heart stops or beats way too quickly and sends the information back to Children’s). She was released fairly quickly, and we were sent back home. At home, Olyvia started to get a fever and her chest looked like it had a golf ball in it. We flew back to Children’s,  where doctors removed the loop recorder and discovered that her chest was covered in a staph infection! They considered  inserting a pacemaker but wanted to wait until Olyvia was bigger. At two years old, Olyvia only weighed 18 lbs.

Back at home, we would check her heart rate on our pulse oximeter every day. One day, her heart was beating at 167 beats per minute. Some of her chambers were beating at twice that rate! Doctors finally decided to give Olyvia a pacemaker to help control her rate, and they opened Olyvia’s chest for the third time. We waited in the Ronald McDonald house to wait for her follow-up appointment. Two days after the surgery,  Olyvia had a high fever and her stomach was bulging. We took her to the ER and they determined she had a hernia under the site of the pacemaker insertion. Olyvia underwent emergency surgery that night. The doctors did not remove the pacemaker, wanting to save it. However, Olyvia was still hospitalized with extensive antibiotic administration and was not getting any better, so doctors decided to take out the infected pacemaker. (Thank God that they removed the pacemaker when they did because her heart was on the verge of becoming infected). She had three major surgeries within one week!

She was hospitalized for 3 weeks and quarantined within her room.  I convinced  the healthcare providers  to release us to the Ronald McDonald house with the wound vac (Olyvia was the youngest under 17 to be released with a wound vac).  Olyvia had another chest infection, which required an additional opening of her chest. The tissue wasn’t healing even though it was completely closed for over a month. We stayed for two more weeks at that time. She was cardioverted again on October 20th (my birthday). She handled cardioversion very well and regained control of her heart rate.

In December of 2016,  we had a follow-up with all of her doctors.  The echo revealed a new heart problem. Olyvia had a leaky AV valve which had exacerbated her pulmonary hypertension. Her pulmonary pressures had risen up to 50. The doctors gave her another medication  and assured us that they’d  watch her valve closely. They also informed us that she might need another operation. On March 5, 2017, Olyvia was flown back over to Children’s.  She was cardioverted  and had a second pacemaker placed on March 7. Because she has severe sleep apnea, Olyvia had her tonsils and adenoids out on March 13. 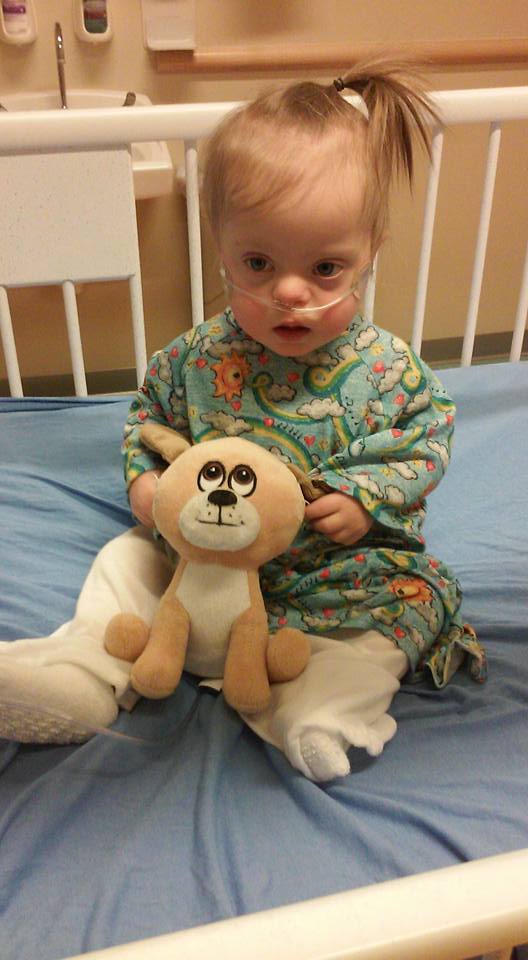 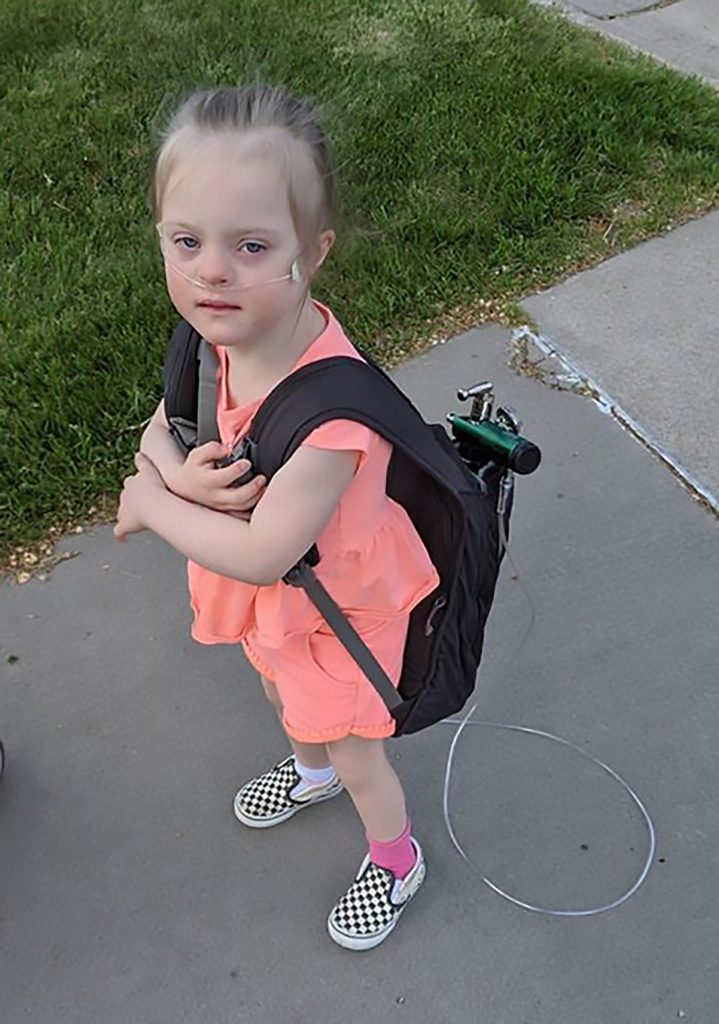 Right now she is doing great! She just had an echo and it was unchanged! Olyvia loves to learn and be at school just like any other child! Being on oxygen hasn't stopped her from having a "normal" childhood.

Because Olyvia has pulmonary hypertension, her oxygen levels can fluctuate dramatically. Knowing what Olyvia’s oxygen levels are can literally save her life! We can’t always be with her so the people won’t know what to look for. When Olyvia’s oxygen levels drop, she does not act as though she is sick. Therefore, it’s hard for us to even know she needs extra oxygen support unless she passes out. Being able to see her oxygen saturation will make our lives easier and also assist the people who help watch her.

She’s living her life like a real warrior and we as parents do whatever we can to help with that.