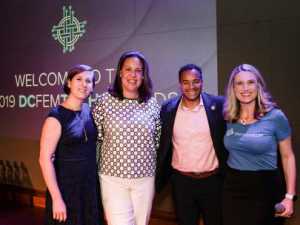 Nominations for outstanding women in code, design and data opened on March 6 and the organization received a record 704 nominations – 80 percent higher than the last two years.

DCFemTech supports organizations that lower the barrier to entry for women in tech and increasing their career opportunities. Members represent organizations comprised of at least 50 percent women and that have a focus on technology and gender/women.

“While D.C. is ahead of the curve with the community and resources available for women in technology, efforts like this will only continue to make D.C. a more welcoming and inclusive environment for future innovation,” DC Government CTO Lindsey Parker said at the June 17 event. “To ensure we remain an inclusive city, we believe our diversity is both a resource and a source for learning. It is what attracts some of the bigger players and the startups and it’s how D.C. became one of the top cities in the U.S. for inclusive, female-driven entrepreneurship.”

Parker also announced the launch of DCx, a public innovation challenge for local developers, engineers and innovators to submit forward-thinking ideas on public safety and health technologies using 5G. The city is partnering on the project with the Metropolitan Police Department, DC Fire and EMS, DC Health and East of the River Services, as well as Verizon’s 5G Lab, US Ignite and Mapbox.

Nominations for DCFemTech Awards were selected by a committee of 45 judges comprised of engineers, designers, data scientists and executives for each category. Honorees were chosen based on their impact on their organization, the complexity of issues they addressed and their work with the community. The final winners ranked in the top 15 percent of their respective categories.